Posted on 22 August 2009 by northkelvinmeadow 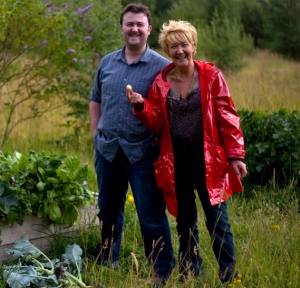 Douglas Peacock, chairman of the North Kelvin Meadow Campaign, and Karen Chung, treasurer, appeared before a Court 1A packed with Meadow supporters at Glasgow Sheriff Court yesterday to defend an interim interdict brought against them by Glasgow City Council. The interdict was sought by the Council to try and prevent Karen, Douglas and the campaign group from cleaning up and improving the derelict land on the site of the former Clouston Street Playing Fields – now known as the North Kelvin Meadow – ahead of a proposed sale to a property developer.

The court action, which has appalled local residents and been described as “absurd” by Patrick Harvie MSP, saw Glasgow City Council get the campaign group’s name wrong in the legal documentation and in court, and radically reduce the terms of the interdict they were demanding before a not-very-impressed sheriff.

The sheriff was asked to consider such weighty matters as bat boxes and illegal mixed salads, as the Council’s solicitor attempted to read out in court private emails sent by campaign group members – presumably obtained by the solicitor from the Glasgow City Council Stasi files. He was cut off pretty sharply by the bench: “Yes, yes. I have them in front of me.”

The proceedings were mercifully leavened by the sheriff’s nice line in dry wit. Our favourite comedy moment was the following exchange. Sheriff to Douglas: “What exactly are bat boxes?” Douglas: “Boxes for bats, M’Lord.” Sheriff: “Ah yes. Perhaps I should have been able to work that out.”

Karen will seek to have this limited interdict overturned on appeal. She will base her case on a motion passed by Glasgow City Council in October 2008 which encourages the public to make use of derelict land for crop production in the period before development takes place.

In his closing remarks on Friday, Douglas reminded the court that this was the first time the community group had been in the same room as the Council – despite the group’s repeated requests for a meeting and attempts by Bob Doris MSP to broker this. This gives the lie to the Council’s claim to have consulted with the local community.

The Council’s claim that the community had a choice about what would happen to the land and chose the residential development the Council favours is also disingenuous. At the consultation stage, the community was, in fact, presented with four broadly similar proposals, all residential in nature. It opted for the ‘least worst’.

“Now the community have chosen what they really want,” said Douglas outside the Sheriff Court on Friday. “Local people have voted with their feet – and their trowels – and chosen a green space.”

Furthermore, although the Council claims the money from the sale of the land will be used to refurbish playing facilities at the corner of Queen Margaret Drive and Maryhill Road, in fact only a fraction (less than one-tenth) will be used for this purpose. What will happen to the rest? There has been no word from the Council about this. Could it be that local people are being deprived of their green space to pay off the debts the Council has run up?

To read the press release about the court case click here

To read an article about the court action published in the Herald on Saturday, 22 August click here

This entry was posted in News. Bookmark the permalink.